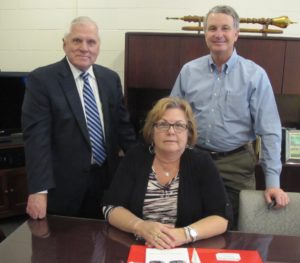 Rick Fournier of Poland passed away in October 2015 after a long battle with cancer. An army veteran of the Vietnam War, he had a long career in industrial supply sales, including 14 years with Butler Bros., where his coworkers became a second family. He was survived by his wife Suzan, two children and three grandchildren.

Butler Bros. President Pat Butler notes that the purpose of this endowed scholarship fund is to perpetuate Rick’s spirit and the qualities of life he embraced. Proceeds from this fund will provide scholarship assistance to students in Precision Machining Technology, a program that was very important to Rick.

Photo caption: An endowed scholarship fund in memory of the late Rick Fournier has been established at Central Maine Community College. Left to right are CMCC President Scott Knapp, Rick’s wife Suzan Fournier, and Pat Butler, president of Butler Bros., where Rick had been employed for 14 years.