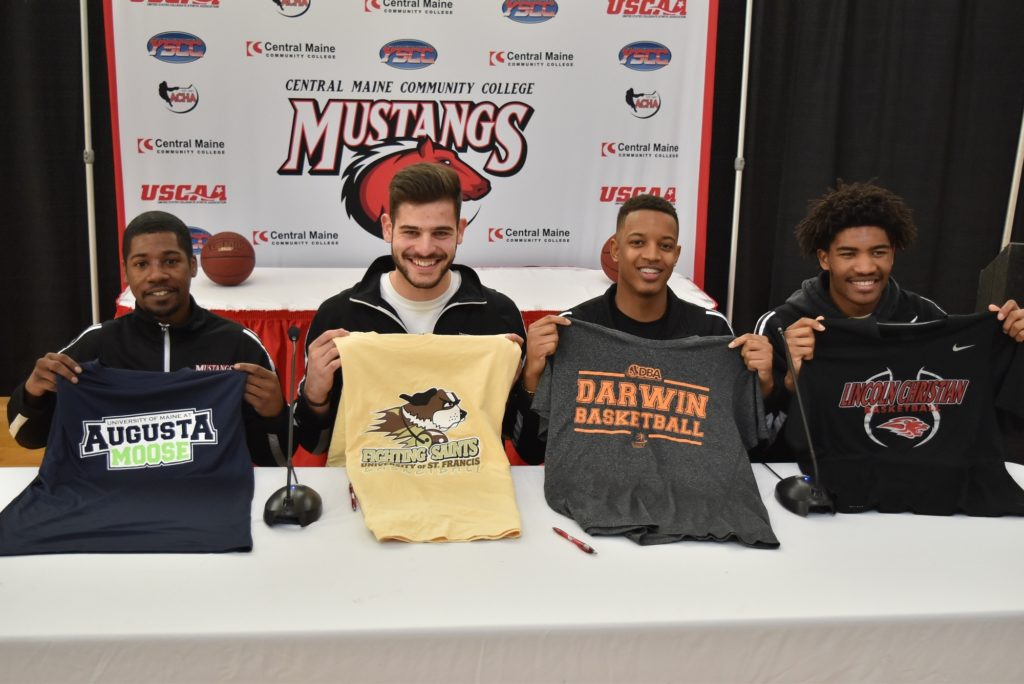 Central Maine Community College held a signing ceremony recently for four men’s basketball players who have signed letters of intent to continue playing in college or in an Australian league. Athletic Director and Head Basketball Coach Dave Gonyea announced that the four players have received these attractive offers because of their accomplishments on the court and in the classroom.

Pietro Badalassi has accepted academic and athletic scholarships to attend the University of St. Francis in Joliet, Illinois. The Canberra, Australia native is graduating with high honors in the Business Administration and Management program. A two-time winner of the CMCC Male Student Athlete of the Year Award, Badalassi was USCAA All-American and runner-up Player of the Year in the Yankee Conference this year.

According to St. Francis head coach Ryan Marks, “Pietro is a versatile wing forward who can play multiple positions and brings significant toughness, leadership, and decision-making to our squad.”

Cornelius Lawhorn will attend Lincoln Christian University (LCU) in Illinois on an athletic scholarship. The Georgia native averaged 11.4 points and five rebounds per game and led the team in charges this past season. A business major at CMCC, he will continue his studies in business at LCU. LCU Coach Donny Aeits had this to say about Lawhorn: “All of us here at LCU are extremely excited about the signing of Cornelius.  He is the kind of person and player that we look for . . . to be a leader both on and off the court.”

Sheveran Hardy of New Britain, Connecticut will be moving on to the University of Maine at Augusta, where he will major in Mental Health and Human Services. At CMCC, he played in 31 games and averaged 6.5 points, 2.5 assists, and 2.1 rebounds per game. According to UMA head coach Jim Ford: “Shev’s talents at the guard position will improve the Moose need for balanced scoring and floor leadership.  His speed and athleticism will be a boost to our defensive play and scoring in transition.”

Rob Skinner has accepted an offer to play semi-professional basketball in Australia. A native of Winsted, Connecticut, Skinner was named a USCAA Second-Team All-American this year and recently was honored with the title of “Mr. CM Basketball.” Skinner will be moving to Darwin, Australia to play in the Darwin Basketball Association.

All four players spoke about the strong supportive community they have enjoyed at CMCC, both in the classroom and on the court. Lawhorn noted that the men’s and women’s teams, the coaching and conditioning staff and their fans “really formed one big family.” The players stressed that excellence was always the goal, with Skinner adding that being a student athlete at CMCC is all about “how good do you want to be?”

Photo caption: Participating in a recent signing ceremony at CMCC were basketball players (from left) Sheveran Hardy, Pietro Badalassi, Rob Skinner, and Cornelius Lawhorn. Hardy, Badalassi, and Lawhorn are transferring to other colleges and Skinner will be playing in Australia.