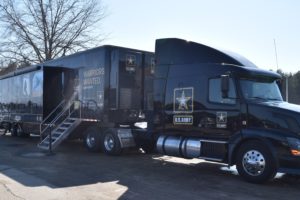 The U.S. Army “Esports Semi” on the campus of Central Maine Community College.

The trailer, which supports recruiting efforts and the Army’s Esports initiative, is equipped with eight gaming chairs, multiple screen monitors, and a variety of gaming consoles. Students were invited to test the equipment and to challenge army personnel to a round of “Splitgate.”

Staff Sergeant Rick Jones noted that CMCC, the first community college in New England to offer Esports, was the first college in Maine to be visited by the Esports Semi. The next stop was to be at Endicott College in Beverly, Massachusetts.

The Army has its own Esports competition team based at Fort Knox in Kentucky. The team consists of soldiers from various military occupational specialties.In addition to competing in gaming tournaments across the country, they also serve as recruiting liaisons who encourage people to consider all the opportunities the army offers.

The CMCC Esports teams compete in the National Association of Collegiate Esports (NACE). Students who participate have to meet the same requirements as other athletes at the college. CMCC Esports teams are competing in Hearthstone, Rocket League, Overwatch, Fortnite, and Rainbow 6 Siege. The college has a new, 1,600 square-foot arena equipped with Alienware Area-51 Threadrippers; five console stations with Xbox One, PS4 Pro, and Nintendo Switch; and a Twitch broadcast booth for live streaming matches.