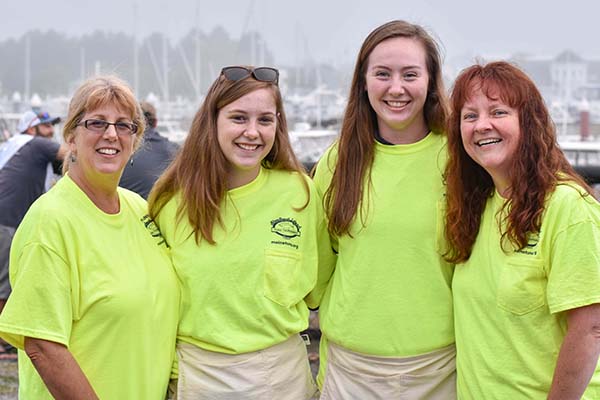 The 2017 CMCC recipients of the Sturdivant Island Tuna Tournament (SITT) scholarships volunteered at the Captain’s Meeting and fundraising auctions held recently for the 20th annual tourney. Rylee Moore of Livermore, a Life Sciences major, and Human Services major Rebecca L’Italien of Poland joined other volunteers at the Spring Point Marina in South Portland for the kickoff event. The SITT is a first-class giant Bluefin tuna fishing tournament that brings together highly skilled anglers from all over the Northeast. The event is a major fundraiser, as the SITT Charitable Foundation has made more than $600,000 in contributions since the inaugural event in 1998. Most of the funds have gone toward establishing and growing scholarship endowments at Maine’s community colleges, including Central Maine Community College. A record 27 Bluefin tuna were weighed in at this year’s event, and veteran Captain John Harmon and his “Banshee” were the winners with their 719-pound catch. Left to right are Patti Ellery, her daughter Rebecca L’Italien, Rylee Moore, and her mom Carrie Moore.